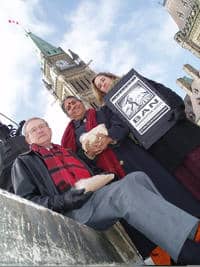 Supporters of suicide seeds argue that they will prevent farmers from reusing GM seeds or prevent contamination. This is both technically and politically wrong. Terminator technologies are highly imperfect and the sterility trait will inevitably bleed into neighboring fields and crops meaning that farmers will unwittingly plant seeds that they will never be able to harvest. More ominously, Terminator is fundamentally a ground-shifting market strategy. If major seed companies are allowed to use Terminator technologies they will immediately transfer all of their plant breeding research onto the suicide seed platform rather than using patent enforcement via legal means. With the incentive of windfall profits, the multinationals will use every resource at their command to persuade government regulators to accept Terminator varieties and will quietly withdraw less-profitable, non-Terminator varieties from the market leaving both farmers and countries stranded with only the Terminator option. Terminator profoundly transforms the economic and political dynamics of global plant breeding.

New genetic engineering technologies are now being applied to the creation of “gene drives” which aim to spread engineered traits deliberately in the wild, including to eliminate pests via sterility traits.

What is Terminator? Terminator Technology genetically engineers plants to produce sterile seeds at harvest. It was developed by the multinational seed/agrochemical industry and the US government to prevent farmers from re-planting harvested seed and force farmers to buy seed each season instead. Terminator seeds have not yet been field-tested or commercialized. In 2006, Monsanto bought the company (Delta & Pine Land) that owns Terminator greenhouse research.

Terminator is sometimes called Genetic Use Restriction Technology (GURTs) – the broad term that refers to the use of an external chemical inducer to control the expression of a plant’s genetic traits.

Why is Terminator a problem? The top 10 largest seed companies control half the world’s commercial seed market. If Terminator is commercialized, corporations will likely incorporate sterility genes into all their seeds. That’s because genetic seed sterilization would secure a much stronger monopoly than patents — instead of suing farmers for saving seed, companies are trying to make it biologically impossible for farmers to re-use harvested seed.

Canadian farms of all sizes save seeds and this practice is growing as the farm income crisis gets worse each year. Across the world, over 1.4 billion people, primarily small-scale farming families in the developing world, depend on farm-saved seed as their primary seed source. Terminator seeds will force dependence on external seed sources and disrupt the age-old practice of farmer seed selection, exchange and breeding – centuries of Indigenous and farmer seed variety development is the foundation of the Canadian seed stock.

Farmers who depend on humanitarian food aid risk devastating crop loss if they unknowingly use food aid grain containing Terminator genes as seed.

Terminator would ensure a corporate stranglehold on seeds and result in higher seed prices at a time when farmers are experiencing the worst income crisis in the history of modern agriculture. If Canadian farmers were forced to buy Terminator seeds every year, the cost would be crippling. For example, an estimated 90% of Canadian wheat is planted with saved seed – in total, the annual cost to buy this seed would be $95 million dollars.

Who holds patents on Terminator? Monsanto could soon conclude a deal to buy Delta & Pine Land (DPL), the world’s largest cotton seed company, which jointly holds three US patents on Terminator technology with the US Department of Agriculture. In October 2005, DPL won new Terminator patents in both Europe and Canada. Also, the multinational seed and agrochemical company Syngenta is requesting a Canadian patent on its Terminator potatoes. But Indigenous potato farmers in the Andes of Peru have asked Syngenta destroy this patent.

Will Terminator stop genetic contamination? The multinational seed industry is waging a public relations campaign to promote Terminator technology as a means to stop unwanted genetic contamination from genetically engineered (GE) plants (particularly for potential use in GE trees and plants modified to produce drugs and industrial chemicals).

Escaped genes from GE plants are causing contamination and pose threats to agricultural biodiversity and the livelihoods of farmers. For example, Saskatchewan organic canola farmers are suing Monsanto and Bayer for GE contamination (www.saskorganic.com/oapf).

Industry argues that engineered sterility would offer a built-in safety feature for GE plants because if genes from a Terminator crop cross-pollinate with related plants nearby, the seed produced from unwanted pollination will be sterile – it will not germinate. But Terminator technology is a complex system involving multiple inserted genes that all work together in a sequence. Scientists warn that Terminator will not be 100% effective. The likelihood of system failure means it could never be a reliable tool for “biocontainment”. If Terminator is used for “biocontainment” and fails, it would introduce new, dangerous biosafety risks.

October 2, 2015. Industrial farming interests in the Brazilian Congress have introduced a bill that aims to overturn the country’s 10-year old ban on Terminator technology – seeds that have been genetically modified to render sterile seeds. The technology is designed to secure corporate profits by eliminating the age-old right of farmers to save and re-plant harvested seeds. Click here for more information.

December 2013: Fate of Pro-Terminator Bill Uncertain – Brazil’s Judiciary Commission in Confusion: Charges, Counter-Charges and Confrontations Confronted with 35,000 institutional and individual signatures on a petition growing by several hundred an hour, Brazil’s Judiciary Commission agreed to take the Pro-Terminator Bill off the agenda leaving open the possibility that the bill will not be passed until Congress reconvenes in early February. Terminator technology is GM sterile seed technology.

There is no reason to trust this process or reduce our pressure,” says Maria José Guazzelli of Centro Ecológico, “although the government and commission have been taken aback by our opposition, they could pass the bill at almost any moment…everything could happen in February.” Brazilian allies in the Commission and among the civil society organizations attending the negotiations say that representatives and government officials have been shocked by the scale in ferocity of global opposition to the proposed legislation.

November 2009: Canada’s Minister of Agriculture, Gerry Ritz, incorrectly told Chinese officials that Terminator seeds are used in Canada! This is false and leads us to question the Government’s understanding of Terminator and commitment to the international moratorium. You can read CBAN’s letter to the Minister.

On November 5th, the Manitoba Cooperator reported that the Minister said he told Chinese officials that they need not fear Chinese farmers growing Canadian canola because the seeds will not grow: “I assured them that with the varieties we have now, it’s not going to work because they all have Terminator seeds in them…” This is absolutely wrong as Terminator has never been field tested or commercialized anywhere in the world.

Apparently Canada’s Minister of Agriculture does not know what Terminator technology is, does not know that there is an international moratorium on Terminator, and has not paid attention to the thousands of letters and postcards opposing Terminator sent by Canadians over the past 4 years.The Minister’s statement leads us to ask: Why is the Minister not correctly informed about this highly controversial GM technology? What is the Government’s true position on Terminator? Would the Conservative Government support the use of Terminator seeds if the technology was available?

Victory! Global Moratorium Upheld!: The international moratorium at the United Nations Convention on Biological Diversity was upheld and strengthened in March 2006 thanks to pressure from Canadians and people across the world.

Canada still promotes Terminator: In 2005, the Canadian government tried to overturn the UN moratorium. A leaked memo revealed that the government was preparing to push language to allow field-testing and commercialization. However, in March 2006, public pressure forced the government to agree to strengthen the moratorium. But our government has still not taken a stand against Terminator.

Monsanto Bids to Buy Terminator: In August 2006, Monsanto announced it would buy Delta & Pine Land, the US seed company conducting greenhouse trials of Terminator. In 1999 Monsanto made a public commitment not to commercialize Terminator but “Monsanto does not rule out the potential development and use of one of these technologies in the future.”